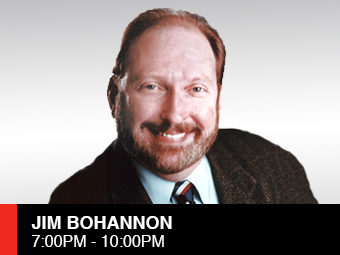 In addition to The Jim Bohannon Show, Bohannon is host of the early morning weekday news magazine, America in the Morning, as well as America This Week, and his unpredictable feature, Offbeat.

A 35-year broadcasting veteran, Bohannon began his career in 1960 at his hometown station, KLWT-AM, Lebanon, MO. After college at Southwest Missouri State University in Springfield and service in the U.S. Army, he moved to Washington where he worked at Easy Listening WGAY-FM and News-Talkers WTOP-AM and WWRC-AM. He later moved to Chicago in 1980 where he worked as a morning anchor at WCFL-FM Radio and as a freelance reporter for Cable News Network.

Bohannon joined Westwood One in 1983 and has anchored newscasts, political conventions and election night coverage in addition to his weekday programs.

Jim Bohannon was recently nominated for the National Association of Broadcasters (NAB) Marconi Radio Award for the Network Syndicated Personality of the Year.