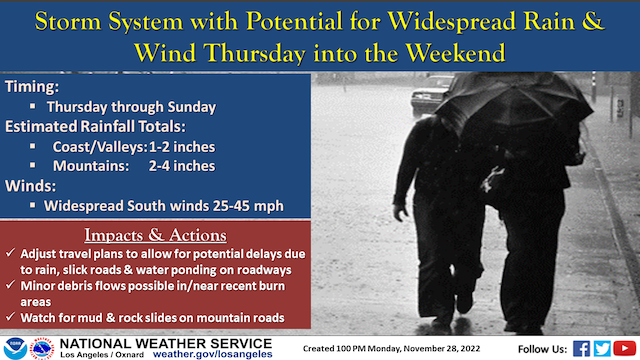 Ventura County could be headed towards a wet end to the work week.

The forecast is for a storm to arrive sometime late Thursday and continue into Friday.

Rainfall amounts would be modest, maybe 1-2 inches in the coast and valleys, with maybe twice that for the foothills and mountains.

A chance of continued showers could also linger into the weekend.

Here's the link you can use to check rainfall totals after the system arrives...

And here's the forecast from the National Weather Service...

"An approaching storm system has the potential to bring widespread rain to the area, with snow likely in the mountains at resort levels.

In addition, gusty south winds are expected in most areas Thursday and Friday, with gusts 25 to 45 mph.

Estimated rainfall totals are 1-2 inches of rain in most areas, with 2-4 inches possible in the mountains.

Snow levels will start out above 7000 feet, but will drop to around 6000 feet so that the major mountain passes are unlikely to see snow.

However, there will likely be winter weather travel conditions in the higher mountains during this time.

In addition, due to heavier rain likely in the mountains and foothills, there will be a chance of minor flash flooding and debris flows in recent burn areas.

Also, there could be rockfall onto mountain roads.

Leave additional drive time due to wet, slick roadways and allow extra time for your commute."