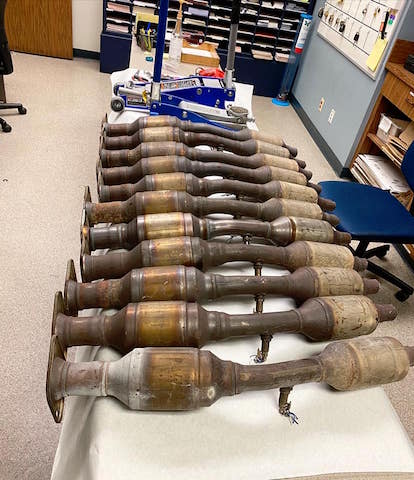 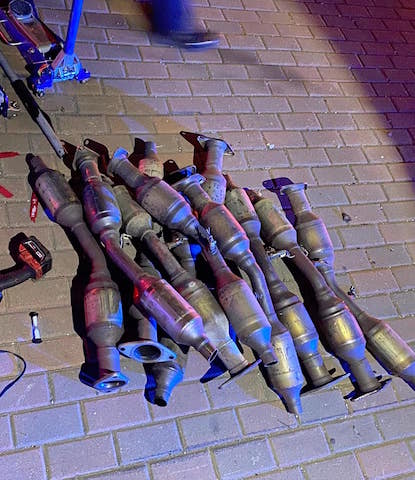 Ventura police captured three suspected catalytic converter thieves early Tuesday morning but not before they led officers on a brief high-speed chase that ended with a crash.

The incident began around 4:23 AM with a 9-1-1 call from an alert citizen who reported seeing several individuals involved in the theft of a neighbor's catalytic converter in the 2500 block of Harbor Boulevard near the Ventura Keys neighborhood.

The citizen gave police the description of the suspect vehicle and it was seen leaving the area onto Harbor Boulevard.

A patrol sergeant spotted the suspects who were now involved in yet another catalytic converter theft in the Portside Ventura Harbor neighborhood.

As the police attempted to arrest them, the suspects fled in their vehicle traveling westbound on Harbor Boulevard at speeds of up to 90 mph with officers in pursuit.

As the suspects tried to turn from westbound Harbor Boulevard to northbound Seaward Avenue they crashed their vehicle.

They were taken into custody and checked out at the hospital before heading to Juvenile Hall to be booked for Conspiracy, Grand Theft, Possession of Burglary Tools, Vandalism, and Possession of Stolen Property.

The driver was also booked for Felony Evading.

Police say 11 catalytic converters were found in the suspect vehicle along with car jacks and burglary tools to remove car parts.

Police were able to identify three victims in the City of Ventura and they are working to identify all the others.

They say all 11 catalytic converters appear to be similar to those of a Toyota Prius.

Anyone with information or questions about the thefts should call Detective Karl Reyes at (805) 339-4476.