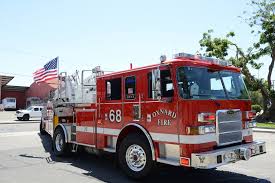 At least six people were displaced by an apartment fire in Oxnard early Tuesday morning.

The fire was reported shortly before 3:30 AM in the 2200 block of San Mateo Place at El Dorado Avenue.

When firefighters arrived on the scene they found black smoke pouring from the second floor of a two-story, multi-unit, apartment building.

There were still some people trapped on the second floor and firefighters went into rescue mode.

All were rescued safely and while they were they were checked out at the scene for smoke inhalation, they reportedly declined further medical treatment.

The Red Cross was requested to help two adults and four children displaced by the fire.