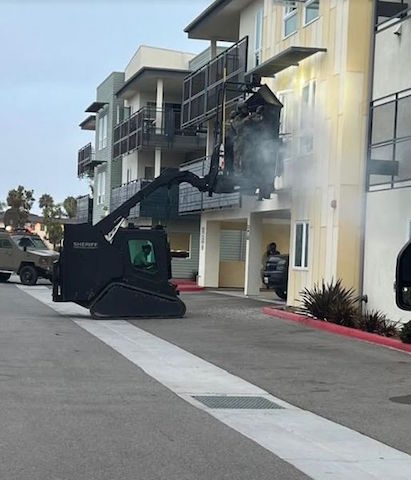 Oxnard police went through a lot of time and effort to finally capture a fugitive parolee in an apartment complex Friday morning.

It started at 2:50 AM when officers attempted to serve an arrest warrant on 37-year-old Frank Morales of Oxnard at the apartment in the 1100 block South Oxnard Boulevard.

They say Morales is a documented gang member and parolee-at-large with a caution code that he could be violent.

They say when they knocked on the front door to the apartment, no one replied so SWAT went in and escorted a woman and child to safety.

They continued to make announcements to Morales to surrender, but with no compliance.

They tried to negotiate for more than an hour, still no reply.

Neighboring apartments were evacuated and then they inserted "chemical irritants" into the residence and Morales finally emerged but he still failed to comply with their repeated commands.

Several more warnings were issued, but with no success, so they deployed K-9 Rocky and Morales was taken into custody and was taken to VCMC to be checked out medically before being taken to jail to be booked.