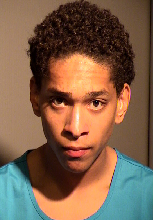 Updated--The Ventura County District Attorney's Office has formally charged the suspect in a shooting at a large underground party that left one person dead and two others wounded.

19-year-old Willis Nichols of Oxnard was arrested Tuesday and Thursday he appeared in court to be arraigned on one count of murder and two counts of assault with a deadly weapon, a firearm.

However, he did not enter a plea and his arraignment was put over until August 4th.

His bail was reduced from $2 million to $1.35 million and he has a bail review hearing set for July 14th.

The shooting happened on the night of March 12th in the 3000 block of Saviers Road.

Witnesses said there had been a large party of about 100 people in an abandoned building when shots rang out.

Responding officers found 21-year-old Adrian Sandoval of Oxnard who was found shot to death at the scene.

Two others, a 19-year-old from Oxnard and a 24-year-old from Ventura, were found in the area suffering from non-life threatening gunshot wounds.

Investigators are encouraging anyone who was present at the event and may have heard or seen anything to contact Detective Justin Songer (805) 385-7680.  The City of Oxnard offers a reward of $25,000 for information leading to the arrest and conviction of any individuals responsible for committing homicides within the City.

Detectives are asking anyone who may have video recorded or photographed all or part of the incident, to upload your media directly to the investigators via the following link: https://oxnardpd.evidence.com/axon/citizen/public/3075saviersroad

All submissions are immediately logged into the Oxnard Police Department’s digital evidence system.  Contact information is not stored by Axon and community members can remain anonymous, choosing to upload their files without providing contact information.

Also, anyone with information regarding this case or other criminal activity is encouraged to contact the Oxnard Police Department at (805) 385-7600, or online via the Oxnard Police Department's website:www.oxnardpd.org, and clicking on Report Suspicious Activity.  You can remain anonymous if you choose to do so. You can also remain anonymous by calling the Ventura County Crime Stoppers at (800) 222-8477. You can also visit this site: www.venturacountycrimestoppers.org to submit a tip via text or email.