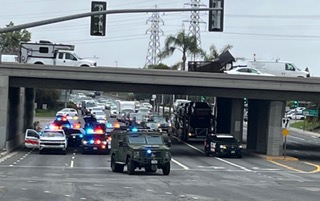 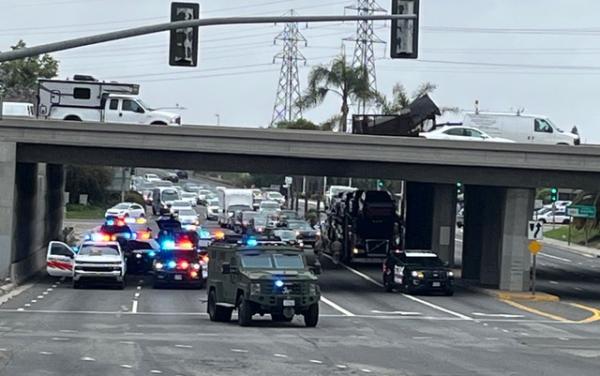 Updated--A freeway off-ramp and major street were shut down briefly during Friday morning rush hour so that Ventura police could take an individual into custody following a report that he had allegedly brandished a sword and made threats.

Ventura police say the incident started around 8:30 AM at two locations in the area of Valentine and Victoria.

Police say in addition to allegedly brandishing the sword, the suspect also made verbal threats to at least one of the victims.

Officers spotted the individual they believed was involved traveling in is U-Haul truck northbound on Victoria Avenue.

They made a high-risk enforcement stop under the 101 freeway.

Because of the reports that he had a sword, and also might have a gun, police shut down northbound Victoria Avenue under the 101 plus the Victoria off-ramp from northbound 101.

They say the suspect initially refused to come out of his vehicle.

Police brought in their armored vehicle and continued to order him out of the truck.

By 9:10 AM he finally did and surrendered without further incident.

They say no gun was found.

He was booked into the Ventura County Jail with bail set at $60,000.

On Tuesday he pleaded not guilty to a felony regarding making criminal threats and he denied three felony special allegations including having a prior strike, having a prior serious or violent felony, and use of a deadly weapon.

This same individual is also facing trial next month in connection with an incident near Oxnard almost a year ago in which he is alleged to have violated another person's civil rights in what prosecutors called a hate crime.

The DA's office alleges he yelled a racial slur at a 51-year-old Hispanic man on East Gonzales Road.

He is facing a misdemeanor charge for that plus a misdemeanor battery charge and a felony charge of trying to dissuade a witness from reporting a crime.

He had been out on his own recognizance in that case when Friday's incident happened.