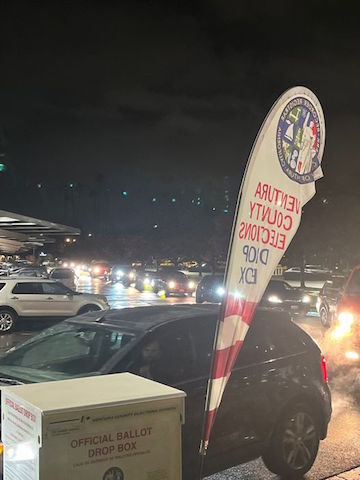 First Election Update In A Week Due Out Tuesday Afternoon

The links below will provide all the information you need on election results in both Ventura County and throughout California.

Once you are on a link, if you hit refresh any updates will appear.

This link will take you to the California Secretary of State's election results page where you can get results for statewide races, statewide ballot propositions, and district wide results for Congressional, State Senate, and Assembly races https://electionresults.sos.ca.gov/

Update--Ventura County election officials will release another vote count update Tuesday afternoon, the first since before the Thanksgiving Holiday weekend.

As of last Wednesday's update, there were only 3,111 ballots countywide that were left to be counted and they were ballots that were damaged, need to be remade, or require further review.

Last week's update settled the close race for the Second District seat on the Ventura County Board of Supervisors with Jeff Gorell declared the winner in a news release from the County of Ventura.

There were a number of flip flops in the race for several other city council races but only a couple that remained too close to call.

The County Elections Division has until next week to officially certify the results.

When Tuesday's update comes out, we'll update you in this story.

It is the clearest picture yet on the likely if not definite winners and losers in the midterm election.

The only ballots left to be counted are 3,111 ballots countywide that are damaged, need to be remade, or require further review.

As far as the latest results in races that before now were too close to call or had last minute flip flops in who was leading...

Jeff Gorell says he has won the race for Ventura County Supervisor in District Two and the latest results would seem to bare that out.

In the race for Mayor of Ojai, incumbent Elizabeth Stix looks to be re-elected with a 36 vote lead over Happy Days star Anson Williams.

In the race for Ojai Council District 2, Lang leads Haney by 33 votes.

At one point the had been tied.

For Ventura City Council District 5, Bill McReynolds appears to be the winner with a 120 vote lead over Marie Lakin.

For the second seat up for grabs on the Fillmore City Council, Mendez leads Rodriguez by 9 votes.

In the race for Moorpark City Council District 1, Delgado has a 29 vote lead over Mikos.

The check all the races and keep updated, go to the link a the top of this story.

The next update will be Tuesday, November 29th.

Update--There are less than 4500 unprocessed ballots left to be counted countywide in Ventura County and almost all of them are damaged ballots or ballots that need to be reviewed, virtually everything else has been counted.

In the race for the Second District on the Ventura County Board of Supervisors, Jeff Gorell still leads Claudia Bill-De La Pena by more than 2,000 votes and has declared victory.

Happy Days star Anson Williams lost his lead in the race for Ojai Mayor and now Elizabeth Stix is leading by 40 votes.

In the race for District 5 on the Ventura City Council, Bill McReynolds maintained his lead over Marie Lakin by 118 votes

In the Camarillo City Council District 5 race, Martha Martinez-Bravo has now taken the lead over Charles Sandlin by 21 votes after trailing since election night.

In the race for District 2 on the Ojai City Council, Lang increased her lead over Haney to 32 votes.

In the race for a second seat on the Fillmore City Council, another flip-flop, Mendez now leads Rodriguez by ten votes.

In the race for Ventura County Community College District Area 2 Lichtl stay ahead by 383 votes over Weihe.

Because of the Thanksgiving holiday, the next update will be Wednesday (tomorrow) at 4 PM.

For a look at all the races, use our two links at the top of this story.

Update--The midterm vote count in Ventura County is getting closer to finality.

It was released on Thursday, November 17th and it showed that there are only some 34,000 unprocessed ballots left to be counted countywide.

The voter turnout county wide is now approaching, and will go over, 50 percent.

Meanwhile, some close races are now looking more and more decided while there are still a couple that are too close to call.

In the closely watched race for Ventura County Supervisor in the Second District, Jeff Gorell continues to widen his lead over Claudia Bill-De La Pena in a continuing trend that appears to show he is headed for victory.

In the race for Ventura City Council in District 5, Bill McReynolds has increased his lead over Marie Lakin from 28 to 128 votes.

In the Camarillo City Council contest for District 5, Charles Sandlin has increased his lead over Martha Martinez-Bravo from just 5 votes to 23 votes.

In the Ojai City Council Race for District 2, Haney and Lang had been tied at 348 votes but Lang now leads by 4 votes.

In the contest for the second of two seats on the Fillmore City Council, Luis Alberto Rodriquez increased his lead over Albert Mendez from 41 to 50 votes.

The race for Area 2 on the Ventura County Community College District Board had been close with Lichtl just 17 votes ahead of Weihe but now it's 550 votes.

The next update will be next Tuesday, November 22nd.

It was released on Tuesday afternoon, one week after the election with another release set for this Thursday.

The latest vote count increased the voter turnout countywide to more than 41 percent with Ventura County Clerk, Recorder and Registrar of Voters Mark Lunn telling KVTA that he expects the final voter turnout will be around 50 percent.

There are still about 79,000 unprocessed ballots county-wide that have yet to be counted, 77,800 of them are last minute mail-in ballots with the rest provisional, conditional, and other types of ballots.

The deadline for all mail-in ballots to be in the hands of the Election Division was (Tuesday, November 15th) evening.

One of the half dozen or so contests that are still too close to call is the race to decide who will represent District 2 on the Ventura County Board of Supervisors.

The latest count shows Jeff Gorell increasing his lead over Claudia Bill-De La Pena from 484 to 735 votes but the margin is still only about 1.3 percent.

In the battle for District 5 on the Ventura City Council Bill McReynolds has now taken the lead over Marie Lakin by 28 votes.

He had been trailing her since election night but while he now leads, it's by only one half of one percent.

District 5 on the Camarillo City Council is also a razor thin race where Charles Sandlin still only leads by 5 votes over Martha Martinez-Bravo.

In the contest for the second of two seats on the Fillmore City Council, Luis Alberto Rodriquez increased his lead over Albert Mendez 34 to 41.

In the race for the Ojai City Council in District 2 there is actual tie between Haney and Lang with both at 348 votes.

Measure L in Ojai that would have the mayor selected from among five council members is losing by a wider margin since election night so it appears the mayor will continue to be a separate office.

In the race for Area 2 on the Ventura County Community College District Board the two candidates are separated by only 17 votes.

Jeff Gorell increased his slim lead over Claudia Bill-De La Pena from 414 to 484 votes although percentage-wise he is still leading by slightly more than one percent.

The race for the District 5 seat on the Camarillo City Council got even tighter with this latest update.

Charles Sandlin's lead over Martha Martinez-Bravo shrank from 7 to 5 votes.

In the contest for the second of two seats on the Fillmore City Council, Luis Alberto Rodriquez had been 38 votes ahead of Albert Mendez on election night, it’s now 34.

Taylor and Rohrbach are still in a tight race for the third seat on the Thousand Oaks City Council.

Lakin increased her slim lead over McReynolds for the District 5 seat on the Ventura City Council from 29 to 39 votes.

There’s also a tight race for the third seat on the Port Hueneme City Council between McQueen-Legohn and Rollins.

Measure L in Ojai that would have the mayor selected from among five council members is losing by a wider margin since election night with the “no” vote increasing its lead from 14 to 49 votes over “yes”.

It all the other races and contests, those ahead on election night have either maintained or increased what were clear leads.

The latest estimate is that the county still has at least 109,000 last minute mail-in ballot that are unprocessed.

Updated story Wednesday at 5 PM--We will be getting our first update Thursday of Tuesday’s midterm election results in Ventura County since the last update at 1:30 AM Wednesday morning, essentially election night.

There are a few races in the county where the last minute mail-in ballots and provisional ballots could change the results.

One is the race for Ventura County Supervisor in the 2nd District that is based in Thousand Oaks.

The last update shows Jeff Gorell ahead of Claudia Bill-De La Pena by just 414 votes or less than one percent.

Another is District 5 on the Camarillo City Council where Charles Sandlin was just 7 votes in front of Martha Martinez-Bravo.

In the race for a seat on the Fillmore Council, Luis Alberto Rodriguez was just 38 votes in front of Albert Mendez for the second of two seats up on the council.

There’s a tight race for a third seat on the Thousand Oaks Council between Taylor and Rohrbach.

There are just 29 votes separating Lakin and McReynolds for the District 5 seat on the Ventura City Council.

And in Ojai, Measure L regarding the future makeup of the City Council regarding how a mayor in chosen is losing by only 14 votes.

The update Thursday afternoon from the Ventura County Elections Division will be the only one until next week.

Previous story from 4 AM Wednesday--Democrats have maintained control of all of the statewide constitutional offices including Governor, Lt. Governor, Attorney General, Secretary of State, and Treasurer.

Also, the U-S Senate seat from California that was up for election stays in the hands of the appointed Democrat incumbent.

The two measures regarding sports betting both lost, props 26 and 27 lost big.

Prop 28 the funding for school arts and music is a winner with prop 29 the kidney dialysis measure going down to defeat.

Prop 30 that measure to tax people with over two million dollars in income to pay for wildfire suppression and environmental programs is a loser, and prop 31 to ban flavored tobacco sales, is a winner.

These are all based on statewide returns.

Let’s look at the races for Congress and State Assembly that involved districts that include Ventura County.

In the 26th Congressional District, district-wide, incumbent Democrat Julia Brownley looks to be re-elected, as does Salud Carbajal, the Democratic incumbent in the 24th District.

In the runoff election for two seats on the Ventura County Board of Supervisors, Parvin appears the winner in the 4thDistrict while there is a close race still in the 2nd District between Bill-De La Pena and Gorell with Gorell slightly ahead late Tuesday night.

Measure C in Oxnard for council and mayor term limits is winning.

Measure L in Ojai to have the council made up of five members who pick the Mayor from among them is losing by 14 votes.

Meanwhile, Happy Days star Anson Williams is slightly ahead in his bid to become Mayor under the system that picks the mayor separately.

And in Port Hueneme, it is going to remain the City of Port Hueneme, Measure D which would have made it Hueneme Beach is going down to defeat, big time.

Finally it appears that all six school bond measures involving districts in Ventura County are winning.

To get results on these and all the races both in Ventura County and statewide refer to the links above this story.