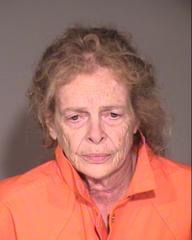 80-Year-Old Simi Woman Who Killed Her Boyfriend Is Sentenced

Updated--The 80-year-old Simi Valley woman who pleaded guilty in June to Voluntary Manslaughter in the shooting death five years ago of her 84-year-old boyfriend was sentenced Wednesday to 14 years in state prison.

Mary Karacas had been charged with murder in the death of Salvatore Orefice in July of 2016 but prosecutors allowed her to plead guilty to Voluntary Manslaughter instead.

His body was found in a bedroom of the house they shared in the 6200 block of Anastasia Avenue when the new owners were moving in.

Karacas returned to the house while police were there investigating the discovery and later she reportedly admitted killing her longtime boyfriend during an altercation.

It was Simi Valley's first homicide of 2016.

Her 14-year sentence included 11 years for killing her boyfriend with 3 more years tacked on because of an incident while she was in jail in which she attacked and bit her cellmate at the Todd Road Jail.